Whisky and glitz go quite well together and if the team from http://www.thelittleblackbook.co.za/ get involved, you know there will be a party of note. Add men’s fashion from www.fabiani.co.za and ladies fashion from Callaghan, a generous dram or two of www.chivas.com in the www.capetown.oneandonlyresorts.com hotel and you have the recipe for a great night.
Here is the official press release and a couple of photos.
Press Release
19 November 2010
The One and Only came alive last Thursday with the Fabiani and Callaghan Fashion Party of the Year. Models, celebrities, media and the big wigs in the corporate world flocked to the hotel to celebrate the fashion house’s spring/summer collection. Guests were served the distinguished Chivas Regal on arrival and posed for pictures on the red carpet before being escorted into the lavish hotel.
The A-list crowd then mingled and nibbled on delicious food from the esteemed Reuben’s and internationally acclaimed Nobu. Shortly afterwards the male models, dressed smartly in Fabiani suits, made their grand entrance at the top of the stairs in the foyer while the stunning girls from Callaghan made their elegant entrance by the Vista Bar. After posing in the Fabiani and Callaghan lounges, the models dispersed to interact with guests, 3 of which received a ToyWatches. Guest also had the opportunity to pose in the Leica booth and capture their favourite moment of the night.
Some of the celebrities who attended were Herschelle Gibbs, Tracy McGregor, Gina Athens, Michelle Mclean, Nicky Greenwall as well as international celebrities Anna Friel (Lead actress in Pushing Daisies & BLOCK BUSTER MOVIE with WILL FERREL) – Land Of The Lost, Raoul Bova (From the movie Under The Tuscan Sun) & Chef Nobu Matsuhisa’s who flew in from NEW YORK especially for the party.
Special thanks to Chivas, Fashion Choreographer -Deon Redman, ToyWatch, Wayne.com from the One&Only Hair Salon, The Big Issue Make-Up Academy, Carol from Cavendish Square, Lindt, Leica, Carol from Coda, Dino Moran, Mandy & Peter Lumb, Rikki’s Taxis, and Wings Group for the incredible treats. 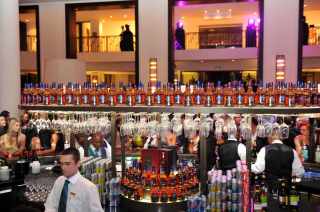